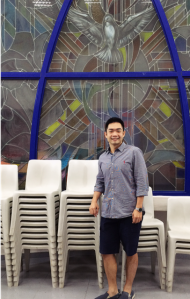 “Strangely, I have always prided myself as a Church-going Catholic and assured myself that so long as I’m in, I’m never out.

It wasn’t until troubles hit home that I admitted I had long left the Church spiritually. My relationship with God took backstage since 2005 when I focused only on my career. While God was always the endorser of my plans – I submitted my plans every morning – I never sought if it was His will. It was always: My will be done.

And in the last two years that I was lost, I sought all sorts of indulgences to compensate for the vacuum in my heart, until I found myself extremely depressed at my state of life. I had hit rock bottom.

A priest friend told me about Landings and I thought: I didn’t leave the Church so why should I go? But with no other solution to my problems, I joined Landings.
Initially I was apprehensive since I felt that Landings caters to people who have left the Church. Not me. But I’ve had many opportunities to look deep into my life since then. I felt understood and accepted. I decided to give my heart back to God. And life thereafter has been different. I’ve been healed.

God’s no longer just the endorser of my plans. Now I seek His will daily because His plans are the best. I don’t walk in fear or uncertainty because I’m walking in His path. When I fail, I’ll keep ‘returning’ to Him. Never again, to my old ways.”